See all our previous layouts (hosted on various sites) 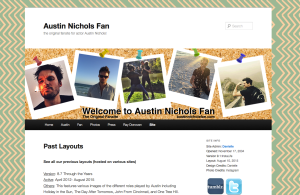 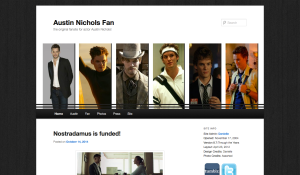 Version: 8.7 Through the Years
Active: April 2012- August 2015
Others: This features various images of the different roles played by Austin including Holiday in the Sun, The Day After Tomorrow, John From Cincinnati, and One Tree Hill.

Version: 7.0 Feeling Good
Active: June 7, 2008- April 2012
Others: This layout features a few pictures from Davis Factor Photography. The layout is very simple with a gray layout. The pictures of Austin look more sophisticated so I tried to keep the layout simple to reflect this.

Version: 6.1 Sunset Perfection
Active: May 14, 2007 – May 2008
Others: This layout features 2 pictures of Austin from an unknown photo shoot. The pictures are credited to Matthew Josef. I think the layout is very calming and perfect for the spring and the summer mood/weather.

Version: 5.6 How the West is Fun
Active: August 17, 2006 – May 14, 2007
Others: This layout features pictures from Austin from his film Durango Kids. I chose to do use screen caps I took from the DVD and create a layout that features several pictures that look like snapshots of Austin. Each picture takes you to a different main section of the site. The background is a simple brown striped pattern. The layout is basically all brown because the west is dirt and that’s brown lol, but I tried to create it in a way that wouldn’t be boring, and Austin’s favorite color is brown so I hope he and everyone else likes it.

Version: 4.4: On Surface Level
Active: January 28, 2006- August 16, 2006
Others: This layout features pictures from Austin as Jackson from his role on the NBC show Surface. Pictures used in this layout are credited to NBC.com. The layout uses a lot of pastel colors to create and easy on the eyes design. The background is a grey and light aqua patterned painted lines.

Version: 3.2: Summer Holiday
Active: August 2, 2005- January 27, 2006
Others: This layout features pictures from Austin in Holiday in the Sun. I thought these pictures were perfect to use because they are really summery and the greenish-blue color added to the summer feel. The background for this layout is a blueish-green and white diagonal line pattern.

Version: 2.18: Jake Hammond
Active: January 14-August 1st 2005
Others: This layout featured pictures of Austin from Wimbledon. I chose these pictures because they had a spring feel to them and with spring coming soon, I thought it was appropriate. The Layout Banner consisted of a grey and white soft feeling look. The Background for this layout was a horizontal pattern of light and dark grays.

Version: 1.3: Wimbledon Gold
Active: November 17-January 10 2005
Others: This layout featured pictures of Austin from Wimbledon as well as one from the premiere of the movie. I chose this because Wimbledon is now in theaters and they were the best pictures of Austin I could find. The main graphic banner was highlighted in a golden-y bronze. With a grey diagonal striped background for area behind the layout